With Week 1 of the 2020 fantasy football season in the books and the first set of waivers wire transactions processed, you might be looking at your roster like in need of an RB like:

Or, maybe you just want to have some solid picks on your radar?

Regardless, there are always hidden gems on the waiver wire if you’re looking with an open mind. With COVID-19 looming and no pre-season games this year, high player turnover is very likely and might as well be prepped up 🤷‍♂️

Below is my case for Jerick McKinnon for the 2020 Fantasy Football Season provided he gets enough looks and stays healthy:

That may not have been much info, but let’s look at Jerrick McKinnon’s time at Minnesota:

So McKinnon is great at YAC and receptions at the RB position or at least has the potential to be great at these 2 things once again in Santa Clara - but do the 49ers need that right now?

If it wasn’t clear in week 1 of the 2020 NFL season, the Niners are lacking receiving options right now which is shown in Kyle’s move to sign Mohammad Sanu yesterday.

Who could have predicted the 49ers going from in the Super Bowl to losing in what looked like a flat 49ers offense? Well, the data predicted it! The data says that the 49ers WR core did most of the leg work via YAC in the 2019 season! Don’t believe me? This is what Rotoballer had to say about 49ers WR/TE YAC in the context of all NFL teams during the 2019 Super Bowl run season:

“The reasonable thought to have prior to studying this data was to expect every team gaining more yards through the air than on having YAC. Turns out that is not the case in both Indianapolis and San Francisco, in the latter case by a mile.

We can take a better look at it by showing the delta (difference) between aYDS and YAC for each team in percentage terms:” 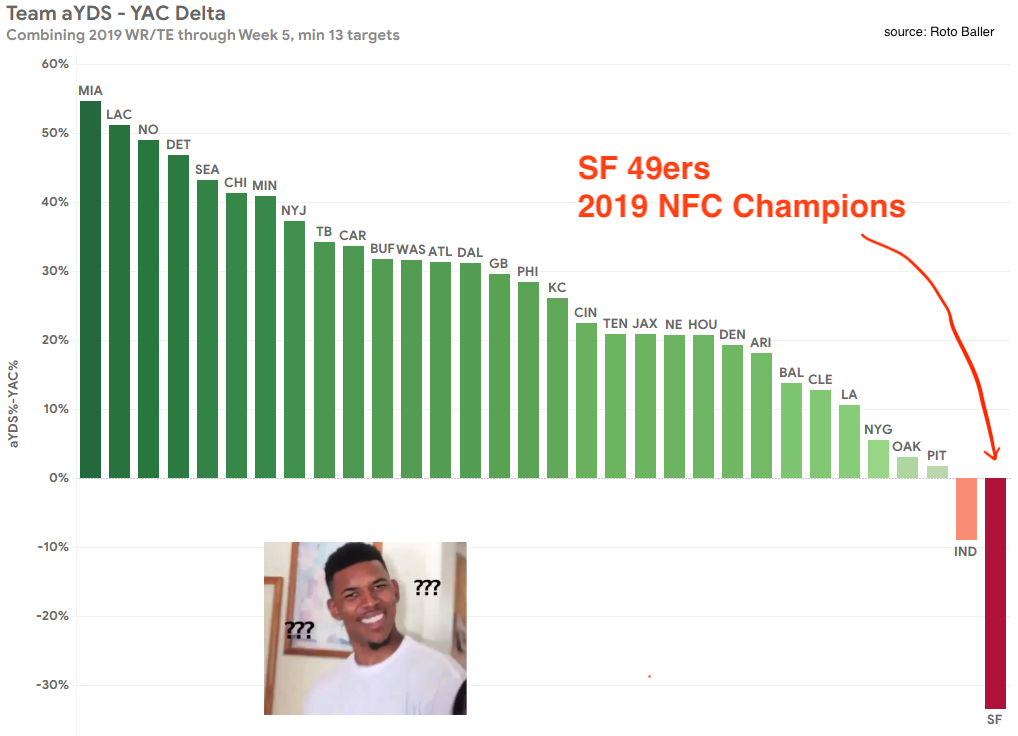 “To say that's unique would be falling short. The 49ers are getting more passing yards from their receivers' efforts after the catch than what Garoppolo is actually doing with his arm. Not only that, but their delta is actually higher than that of the other 21 teams in the other direction! Fear not Niners fans, this essentially means you could put a street-QB at the helm and your receiving corps can still seemingly make something out of their targets.”

While this dataset does not account for the RB position, it does tell a different story than the mainstream story: that Jimmy G is extraordinary and simply performed poorly in week 1 of the 2020 season vs last year. Maybe, he’s having the same performance and the difference is that he is missing all the top-tier receivers he had as resources that he had last year that made him look great via YAC. The lack of Deebo Samuel (injury), Emmanuel Sanders (no longer w/ 49ers), and Goodwin (no longer w/ 49ers) has created an even more significant vacuum in the 49ers offense than is being reported and, has thus created a large market for receivers that can create YAC for Kyle Shannahan’s offense.

Maybe, just maybe, Jerick McKinnon is the man for the job and can fill part of the 49ers massive demand for YAC. Only time will tell.


📧 Get an email alert when a new blog post is released 📧

Disclosure: I am a big 49ers fan so the article might be biased. I picked up McKinnon last week, started him, won week 1. I currently have McKinnon on my fantasy roster on the bench. I am unsure if I will start him this week or not at flex.